USA Triathlon will bring its largest and longest-running National Championships event to Omaha this August. The event, which takes place over a two-day period and features two race distances, will offer opportunities for the community to participate as athletes or volunteers, and USA Triathlon will share new information about the race at a press event on March 23.

WHAT: Media event to reveal new community-focused race option and other details as part of the 2016 USA Triathlon Age Group National Championships, scheduled to take place at Omaha’s Carter Lake on Aug. 13-14.

Local triathletes will also be in attendance.

WHERE: TD Ameritrade Park Omaha, 1200 Mike Fahey Street, Omaha, Nebraska 68102. Free parking is available along the curb on North 13th Street, and attendees should enter through the Suite/Club entrance near the Road to Omaha statue.

USA Triathlon is proud to serve as the National Governing Body for triathlon, as well as duathlon, aquathlon, aquabike, winter triathlon, off-road triathlon and paratriathlon in the United States. Founded in 1982, USA Triathlon sanctions more than 4,300 races and connects with nearly 500,000 members each year, making it the largest multisport organization in the world. In addition to its work with athletes, coaches, and race directors on the grassroots level, USA Triathlon provides leadership and support to elite athletes competing at international events, including International Triathlon Union (ITU) World Championships, Pan American Games and the Olympic and Paralympic Games. USA Triathlon is a proud member of the ITU and the United States Olympic Committee (USOC). 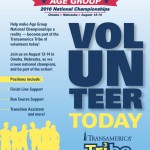