Omaha, NE – Omaha has been selected to host the USA Triathlon Age Group National Championships on August 13-14, 2016. This event attracts over 6,000 amateur and elite tri-athletes from across the United States as well thousands of visitors. The economic impact is expected to exceed 4 million dollars each year.

Omaha was selected to host this event because of its great reputation for hosting sporting events including the Olympic Swim Trials and the College World Series. Additionally, the reputation and efforts of Mimran Event Management and Race Omaha (Local Organizing Committee) caught the attention of USA Triathlon.

“We are very proud and excited to be the host city for the USA Triathlon Age Group National Championships! We worked very hard to make Omaha home to another great sporting event,” commented Alan Kohll, President of Mimran Event Management and Race Omaha.

The event venue is centered in Carter Lake with a scenic bike course along the river and a run course inside TD Ameritrade Park.

Race Omaha and Mimran Event Management organize many area triathlons and athletic events such as the Omaha Triathlon, Omaha Women’s Triathlon, and Youth Triathlon Series. Mimran also provides race management and timing series to many other events. Mimran is a non-profit 501c3 organization.

Recap of the 2015 Women’s Triathlon 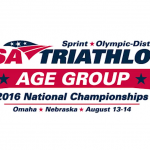