The Omaha Duathlon Is Coming! 

As I hammered down the interstate, I thought about what a cool race course this was! The longest section of the bike leg was on an interstate. Yes, full-on South Carolina interstate! Just minutes before, as I turned left and headed down the on-ramp, I said to myself, “Interstates are made for speed, so let’s go!!” I knew if I was going to get on the podium, I had to fly on the bike. So, I pushed as hard as possible, even though the most painful part in multisport racing awaited me – the second run in a duathlon!

“Du-ath-lon.” What is that? While “triathlon” is becoming a bit more of a household concept, duathlon…well, not so much. The “athlon” part would tell the average person it’s some kind of a competition. The “du” would tell them there are two, things involved. However, your next-door neighbor probably couldn’t tell you what they are.

Yes, there are World Championship and National Championship races for this competition, but still, it’s way under the radar. Athletes who don’t swim, swim poorly or don’t like swimming in dark lakes before the sun comes up with hundreds of flailing arms and legs all around them, make up the majority of duathletes. Some triathletes race duathlons just because they love to compete or because it’s an amazing “leg day” workout.

For a number of years, I tracked the results of the USAT National Championships for duathlon. I thought, if I were healthy, maybe I could hang with my age-group buddies and do well. So, having just aged up, we drove to South Carolina. USAT offered three different National Championship races:  Non-drafting sprint, Olympic distance and Draft-legal sprint. I’d originally planned on racing two of the three but settled on what would match my specialty, the non-drafting sprint.

I knew this was going to hurt and hurt BADLY! It started off with a 5K run followed by the 20K bike and ended with a (just under) two-mile run. Here’s the key to doing your absolute best in a duathlon. Listen carefully… Negative split the two runs! Stay in serious self-control on the first run. Let everyone take off like it’s a 400m track race. They always do. Then, on the second run, give it everything you have left, and you’ll reel in and pass a ton of people.

I would have been able to do well in some duathlons in the past using this method, but this was NATIONALS. And, it was a sprint distance so not a lot of time to fool around. Still, I had to keep things in check on the first run, then go all-out on the bike and finally just hang on during the second run. But still, I was torn about my strategy.

How much should I hold back on the first run?? The gun went off and at the half mile point I realized I was running way too fast. I was just about to slow things down when a guy came by me who was in my age group. For some reason, I told myself to not let him get away. I let him “pull” me along even though I knew I might be toasting myself badly.

Sometimes, to try to reach your goals, you have to take chances. I’ll be honest…I went there to try to win a National Championship. Podium would be really nice, but I was willing to risk blowing up completely on the second run to try to win. I did not take my own advice here.

We came flying into T1 with me barely hanging on to the dude that had passed me. I didn’t know that there was another athlete in our age group that had arrived at T1 just before both of us. I’d cranked out a “19:something” first 5K run and the race wasn’t even close to being half over yet. Yikes! That’s a great time for me in a stand-alone 5K!

I HAD to crush the bike to set up any possibility of winning. At least two guys (and maybe more?) were faster runners that I was. I felt strong and rode fast! Loved the interstate section! T2 – racked my bike and sped off…er…I mean…gimped away from the bikes. My legs were gone. Nothing. Zip. Nada. Dreams in the toilet and hand on the flusher handle. Would my dreams spin around and disappear down the hole?

The second run started with 200 yds. of flat pavement, then up a short but steep hill and at the top, my wife, Jen, was waiting there. I didn’t know what place I was in. She shouted, “You’re in first by a minute, but get going!!” Now, I’m running scared! There are faster runners coming for me. The run included two 180 degree turns so I could see who’s chasing me at the turn around. I started to really fade. Fear started sweeping over me. How lousy was it going to be to get passed and lose?

THIS is what is SO challenging about duathlons. They take serious self-control and a smart strategy that MUST be followed…unless you’re trying to win a championship. Ha!

I gutted it out with lots of self-talk about only needing to suffer a few more minutes. It also helped having to run by my wife two more times before the final turn towards the finish line. I sure didn’t want to have her watch me get passed close to the finish! Feeling like death warmed over, yet running as fast I could, I came to the carpet leading to the finish line, crossed it and won a national title. Whew. That hurt as much as any race I’ve ever done, but boy was it worth it.

Now it’s your turn! The Omaha Duathlon is coming up April 24th. Check it out here. Sign up, be smart, stay in control, negative split the two runs and have a blast! Do several run/bike/runs in training to get your legs used to what the race will demand. I’ve really enjoyed the Omaha Du in past years and can give a big “thumbs up” on it. So, (you knew this was coming) Just Du It! 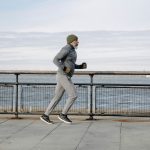 An Early Season Race Reminded Me To… 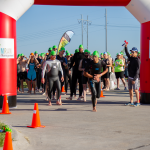  MAY We Start Racing Now?