Triathlon is about cumulative knowledge. Each race, each season, we learn. A lesson here…a mistake there. That worked. This didn’t. Won’t ever do that again. I think I nailed this part!

It’s like a 1,000-piece jigsaw puzzle. You hang with it long enough and the picture comes together. Here’s the thing – all that is still true no matter how long you’ve raced. This my 27th tri season and yeah, I’m still learning.

This blog is one of several in a sort-of series. Recap:

Now, we come to the most recent lessons. Those from 70.3 Des Moines. Many have heard, it was a rough day for about everyone. Big storms delayed the start. The swim was a choppy, crowded, no wetsuit swim-fest. The bike was cut in half and as we rode the sun came out and the humidity exploded. The run was a survival march for many.

I had the slowest swim of the three 70.3s so far. Wasn’t sure how hard to push the 27-mile bike. I’d normally try to smash it because a 10K run would follow. Now, the bike is 13.1 miles. Went hard but certainly not all out on the bike. First loop of run was OK. Second 6.5 miles was really hard. Pace kept slipping and I couldn’t stop that trend.

Primary personal takeaway would be, after three 70.3s since May, I have to improve my run. I can swim and bike with the old guys, but the winners are running 7:45s off the bike. Yeah, in their 60s. The three longest training runs I’ve done have been the three 13.1 mile runs in the 70.3s. Had a little calf issue before Des Moines, so I couldn’t really push the run training at all.

The journey continues. Let’s keep learning together no matter what distance races we’re doing. Every race we do should teach us something new or at least remind us of something we’ve forgotten. Keep after it! 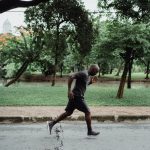