My Journey Towards Mental Toughness

Growing up, I was not mentally tough, or, tough by any definition of the word. There were the “tough” kids in middle school who intimidated me. They had swagger and confidence. They were far more physically developed than the rest of us. They had real muscles and armpit hair. Most were either the good athletes or, as we called some of them, “hoods.” You remember, the rough guys who hung out the bathrooms smoking during class breaks? Me? I was not tough. I had no muscles. I was the very skinny preacher’s kid.

I tried wrestling in 8th grade. Had one match. Lost 12-0. Tough guys wrestle. Short-lived career there. I played football in 9th grade. halfback. Got in 3threegames and about five plays the whole season. Tough guys play football. It was one and done. I was massively intimidated trying to play those sports. So, I played a couple of years of JV basketball at Burke High School, but was intimidated by the varsity guys who were so big, strong and fast. Looking back, my greatest liability as an athlete was my mental weakness and lack of confidence.

Fast forward many years. The first time that I lined up at USAT Nationals in Portland, OR, I kind of freaked out! What was I doing here? I recognized some names. A couple of guys were medalists at Worlds! A 5x age-group champ from the Atlanta Marathon was there. A swimming stud who swam at the University of Michigan lined up. I’d taken swim lessons at the YMCA. Sheesh! Mentally, I freaked out.

Fast forward another few years and I found myself in a similar situation only this time it was the ITU World Championships in Hamburg, Germany. 99 of the fastest guys in the world in the 50-54 age group came to Germany to race from over 50 nations. “What the heck am I doing here?”, I asked myself. I just hoped to not embarrass myself and the “USA” on the front of my top. Again, I felt my brain start to melt down.

I could recount many other times when my mental weakness surfaced. Fast forward yet one more time. Last summer I once again was in training for an ITU World Championship tri in Australia. ONLY…THIS TIME…I was training to get on the PODIUM…and maybe, the top spot. Yep, I was training to win the World Championship. What?? What had changed? How could my brain have progressed from a state of intimidation to having the confidence of trying to be the best in the world?

Here are a few things that helped me develop mental toughness and confidence through 25 years of tri training and 300+ triathlons:

That first USAT Nationals race in Portland? The podium went ten deep. After a horrible swim, I fought back and took 9th. The next Nationals I did in Los Angeles, I was first off the bike, but had a calf issue and five guys ran by me during the 5K. But hope had been planted and confidence in what I could grew. That first Worlds? The 5th fastest bike split helped me to 20th place out of 99.

Mental toughness was now growing like corn in July in Nebraska! Winning my first Nationals in ’12, where I had to run down the USAT number one ranked guy in the nation in our age group and catching him with 300 yards to the finish line for the win, well…it was surreal. I started believing. No more intimidation. Then, finishing 6th at Worlds in London out of 95 guys put me over the top. I’d arrived at a point of mental confidence and toughness I never thought I’d achieve. That attempt to actually win worlds last year? Yeah, that didn’t turn out the way I’d hoped for. But as they say, “Life happens and you just gotta roll with it.”

It doesn’t take days or months to develop this tough mindset. It takes years. It takes dozens even hundreds of races. It takes failures and things going wrong. But that’s the fun part of this crazy sport – figuring it out. It takes time and patience. My fastest sprint tri ever happened when I was 55 years old, 18 years after I started the sport!

Lastly, the confidence and mental toughness developed in triathlon carries over to all of life. I’m a more confident person in all areas now. Just wish I could race some of those dudes who intimidated me so badly in middle and high s. Every blue moon I run into one of them around town. I walk up to them and shove them in the chest and say, “Sup now dude?” Ha. No, I don’t. I just try to race fast…with confidence and mental toughness. You ever feel intimidated doing this sport? I get it. Just keep after it and believe in yourself! Put in the work. Confidence will grow and you can achieve what you NEVER thought you could! 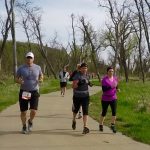 The Omaha Duathlon Is Coming!