I’ve heard all of these noises to start races and they only mean one thing. It’s GO TIME! Last month we talked about how to prepare the last 12 to 36 hours before the race starts. This blog is about the actual race. Let’s look at three things to think about during all five components of a TRIathlon. What? Five? Tri suggests three. Right, but add in the two transitions = five. Counter-intuitive, yeah. Reality? Absolutely.

Let me try to illustrate the information above in a real-life race.

When the USAT Age Group Nationals in Omaha in 2017, my goal was to win. I came out of the water in tenth place, 2:30 behind the leader. In a sprint distance race…at Nationals…that is a dream-killer. That is NOT what I wanted to discover, as that beautiful Carter Lake water dripped off of me as I ran to my bike. I’d placed myself carefully at the swim start and was under control the first part of the swim. Tried to build my intensity as the swim unfolded. Kept my mantras going through my head. Exiting the lake a friend yelled my position/time behind and my heart sank. I’d sprained my ankle 2 weeks earlier and it still hurt a bit as I ran on the uneven grass to T1. Stayed in control in T1, but transitioned as quickly as possible.

It was raining and the streets were wet. That negated my strongest event, the bike, because you HAVE to be careful on wet roads. This was not going well. Jumped on the bike and put the pedal to the metal. Early on, I reached in my Bento Box for a Hammer Nutrition pill-cluster I take during the bike and promptly dropped the pills all over the road. Great.

I put my head down to get a drink from the straw in my aero bottle straw and apparently didn’t let go as I raised my head and the straw came out and fell on the road. Weird. No straw so no liquid. No pills and no way to take them anyway. Rain. 2:30 down. Tenth place. Ugggghhh. Couldn’t remember a race going so badly, but, I kept telling myself, “Keep hammering. Anything can happen!” But even as I said that I was fighting off major discouragement. Major.

I tried to put into practice everything I’ve written about above. I’d trained so hard. My elderly parents were there at the finish line and I SO badly wanted to win for them, but everything was going wrong. Some races go like that. I came off the bike at the bike-in point and some friends yelled that I was in third but over a minute down. A 5K run at Nationals will be quick and a 1:30 gap is almost impossible to make up. These guys are fast.

I applied the tips above for T2 (and a few others) and flew out on to the run. Only two guys were ahead of me even though the race had gone terribly so far. I’d really tried to pace the swim and use my mantra(s). Find open water. Have the fastest T1 possible. Kill the bike, nail my nutrition, etc. with again, bunches of stuff going wrong. Ok. Keep trying. Had the fastest T2 of everyone in my age group.  My race was starting to turn around. In races, you’ll have great points and lousy points. Highs and lows. Keep going!

I started looking for the two guys ahead of me on the run. I was sure that one of them was the 2x National Swimming champ from back in his college days and the other? A 20x World Champion, 12 of them in Hawaii. Seriously? Yep. He’d won world championships at the IM distance and 70.3 and Olympic distances as well. I passed the swimmer at the one-mile mark. OK, good. Now, just one more guy. I knew I’d see him as I got closer to the run turnaround. It was an out-and-back run course. He’d be flying back the other way heading towards the finish line and another National Championship. But, looking hard, I didn’t see anyone in my age group as I saw the runners coming back by. The only wave ahead of ours was the 25-29 and you can sure tell the difference in a 20something and a 60something.

I was mystified. I must have missed him. He must have been so far ahead that he ran back by me before I started looking hard. He was KILLING everyone. I made the turn and headed back hoping to hold second, but totally bummed I was going to miss my goal by one stink’in place.

Then, I looked at those still running out as I was heading back and I saw him. The 20x World Champ. I was ahead of him! Then…who in the world was the guy ahead of me??? I ran it in hard trying to practice all the tips above under “Run,” and as I got to the red carpet my family and friends were going crazy cheering. “They’re just trying to encourage me,” I thought. They’ll tell me, “Second is great. Be proud.”

The finish-line announcer then called out, “Let’s welcome our 60-64 age group National Champion, Lincoln Murdoch!” Huh? No, he was wrong. That guy…the one that was ahead…he won. No. I did. How? I was third into T2 and so I thought I was in third starting the run. But I’d passed the #2 guy in T2 and was actually in second place until I passed the swimmer, moving into first.

The tips I’ve given above were all used during this race. NOT perfectly. A long way from perfect, that’s for sure. But, having some guidelines and mental pictures helped me have a good enough race to win. Take these tips to heart and go get ‘em when the horn goes off! 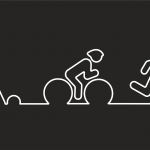 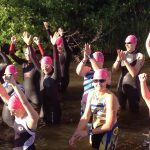